EXTREME HUSQVARNA 300 2-STROKE: BEHIND THE BUILD

Jason “Hapa” McCune has a long history in the dirt bike world representing aftermarket companies, but, more important, he is buddies with the Dirt Bike staff. He’s one of the fun guys we ride with who spends his off-road adventures obsessively searching for technical terrain. He’s raced the Last Dog Standing, the King of the Hammers and sandwiches this brutal world with long trips to Baja, where he jumps onto the Cameron Steele show and the Desert Assassins yearly road trip to Cabo.

His machine of choice is the 2021 Husqvarna TE300i. He prefers the two-stroke (recently retiring his carbureted 2017 Husqvarna 300), and believes in the machine’s core strength of tractable power, reliability and its broad scope of abilities. But, he’s also a stickler for proper setup, focused performance and equipping his steed with the goods that help him conquer the terrain he favors. So, his machine has been painted with products that he believes bolster his riding ability. 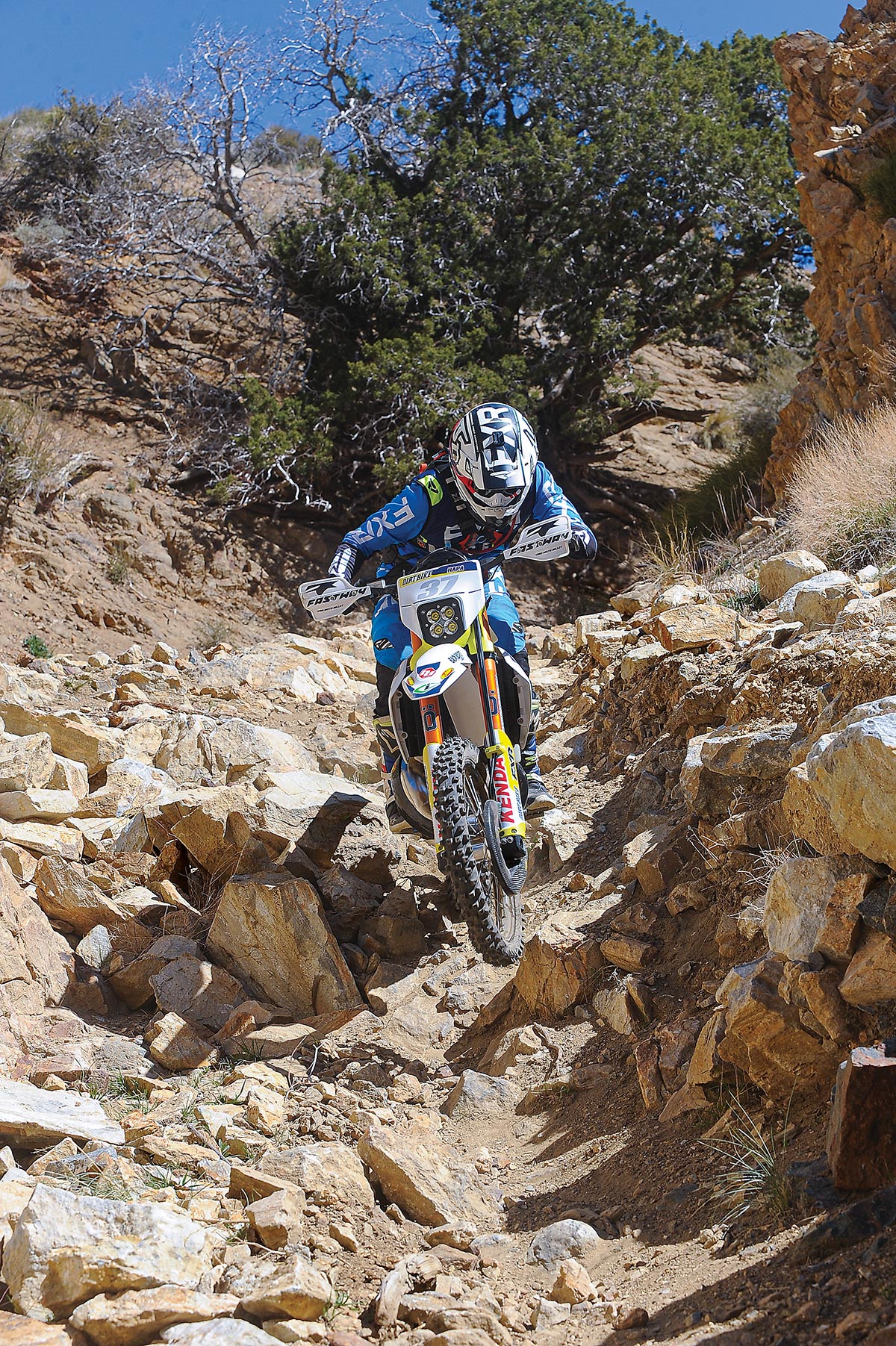 The Gnarly pipe gives a stronger bottom hit, which is critical for tight, technical work. The Turbine Core 2.1 spark arrestor is strong, quiet and forest-legal.

Jason prefers the crisp response of the Boyesen reeds.

Jason has been a long-time Rekluse fan and installed the new Core EXP 3.0 auto clutch before his first ride. According to Hapa, Rekluse auto clutches literally make him feel 10 years younger and allow him to get through and over terrain that he would never even consider otherwise. Without this clutch, he’d be sticking to fire roads! 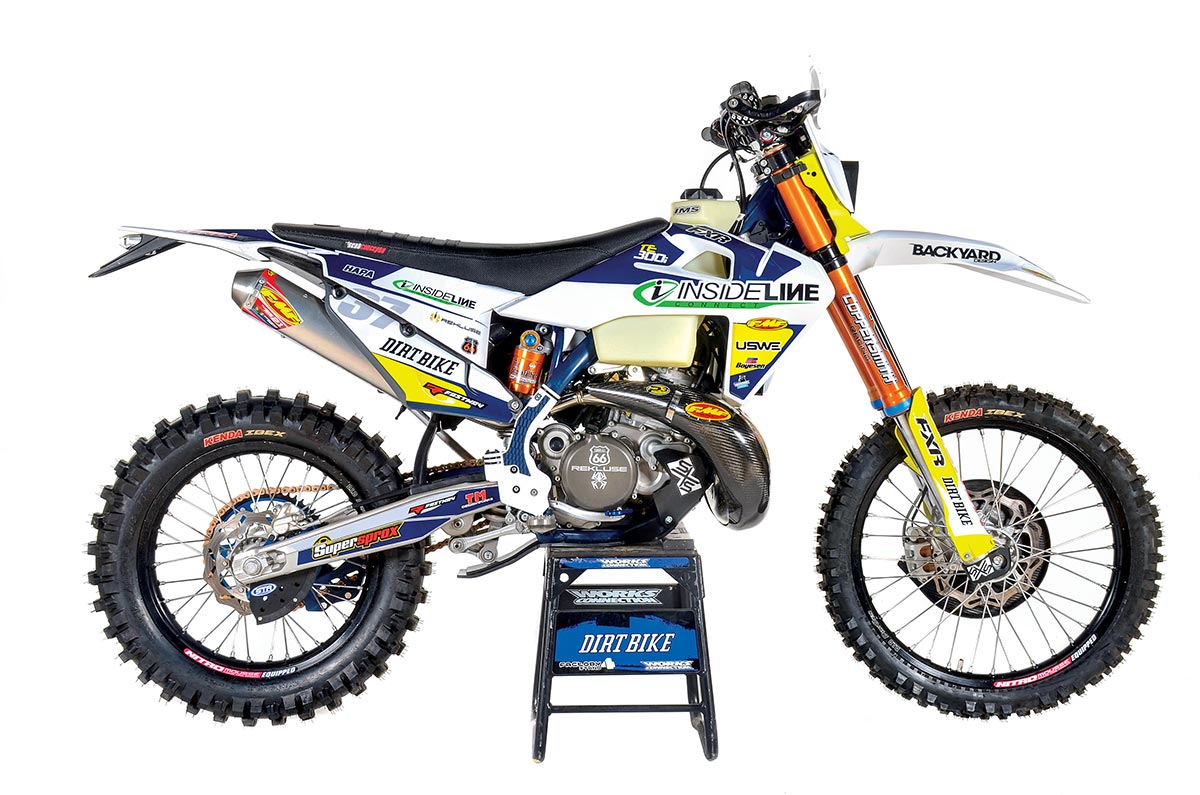 The tire features a soft-compound knob (gummy) and offers excellent traction in ugly, cobby rocks and roots. The rear has a flexible casing, and with the gummy knobs it is a traction maker. Jason only uses this in hard enduro (not faster desert riding). The front also claws and maintains grip in areas where normal tires skid and walk.

Jason fit both ends of his Husqvarna with the Nitromousse Plushie foam inserts, preferring the soft feel and increased traction for the technical terrain he favors. Also, no flats is key!

The stock suspension was harsh for the rocks and slower stuff that Jason enjoys. He went whole hog with the suspension mods, using Coppersmith Racing. The fork mods are extensive, using an Ohlins TTX22 cartridge kit that is a direct drop-in design, eliminating the need for suspension shop installation. It features refined settings and new spring guides that provide a wide range of adjustability.

As for the shock, Coppersmith fit it with an Ohlins TTX Flow DV shock that uses TTX (Twin Tube Technology) with an all-new DV (Dual Valve) for added adjustability for better bottoming resistance with the turn of a screw.

Jason’s initial testing showed that it was a bit stiff on the enduro hack he frequents, but was superb on faster hits and great at absorbing obstacles. He plans on further testing, as the units are designed to be very dialable for terrain changes. 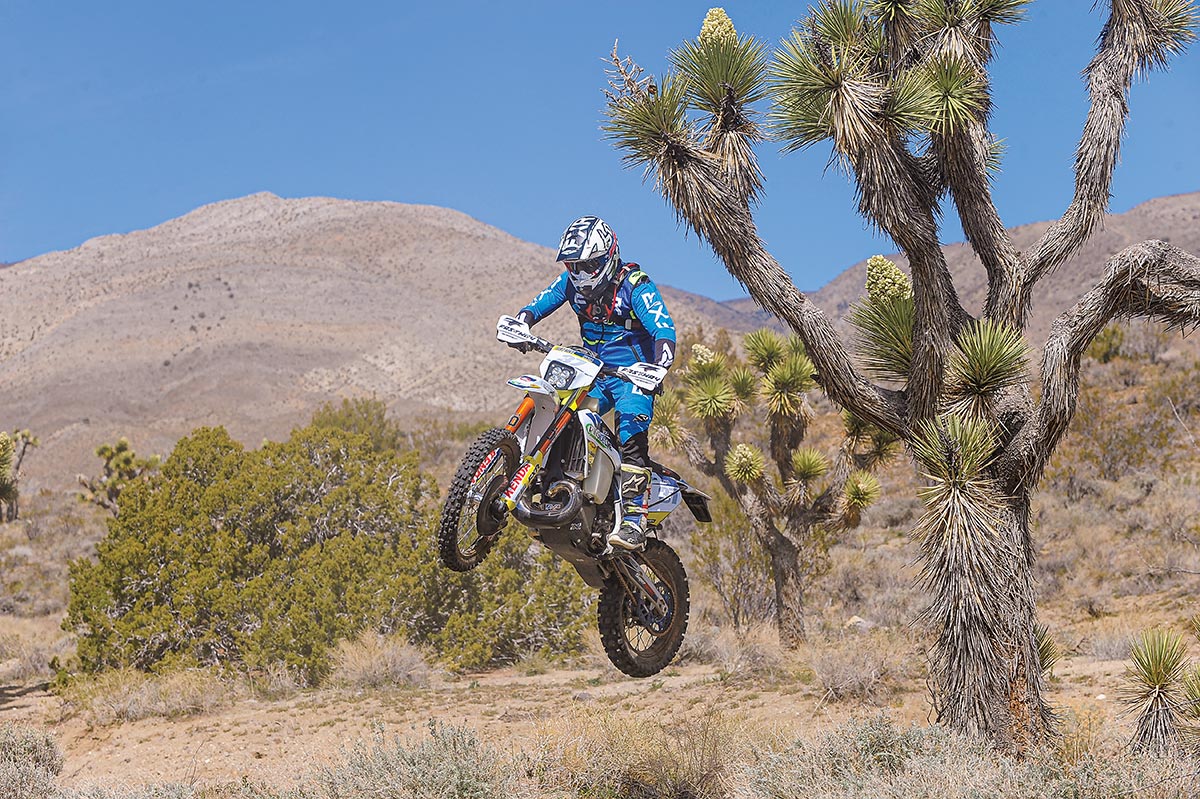 While this isn’t the easiest thing to mount up (easier with a helper), it’s a brilliant protective device. Jason likes it because it’s thick and offers armor for the water pump and ignition covers, plus the rear linkage. Basically, it lets him slam through rocks and slide over logs like he knows what he’s doing.

TM Designworks bolted up its Slide-N-Glide for the swingarm protector and chain block. Why? They’re practically indestructible.

Hapa fit on a front rotor guard and carbon fiber exhaust pipe protector. Jason said that the pieces were cosmetically pleasing and proved to be very durable.

The Fasst Flexx bar was chosen for its ability to give his arms and hands some relief in hacked-up terrain. Super durable, the Flexx bar pivots under duress, relieving harshness at the hands and arms. Jason likes the ability to tune it for the terrain via the various durometers in the elastomers that absorb the hit.

Jason says once you use lock-ons, there’s no going back to glue-on grips. He praised the feel and comfort of the V2 half waffles.

The Fastway Integrated Technology (F.I.T.) handguard system replaces the top bar clamp and prevents your handguards from rotating up or down in the event of a crash, providing excellent rock protection. They’re roomy, not encroaching on hand space, which is something that Jason likes.

A Seat Concepts Element saddle replaced the stocker, which is hard on the caboose. The unit is plush, has good feel and the cover has the perfect grip. It comes with four traction ribs and is 100 percent gripper material. Each Element seat comes seam-sealed from the inside to prevent water from penetrating into the foam, and each foam piece is covered with a thin water barrier as added protection from the elements.

The benefits are that the Core peg is wider and stronger than stock.

Jason fit his driveline with a Supersprox kit, 13-tooth counter, 51 (50 is stock) rear and an O-ring chain. The chain proved durable. The rear Stealth sprocket is a dual design (aluminum inner, steel outer ring) and refuses to show wear.

Baja Designs’ replacement headlight kit gives a major boost in illumination over the stocker, which is weak. It’s designed with good adjustability and features a significant amount of vertical and horizontal spread for serious trail coverage. It’s not cheap, but Jason says it’s critical for his Baja adventures.

Because Jason does long loop rides, he needed additional range. The 3.0-gallon IMS tank is slim, ergonomically sound and offers just enough additional fuel. There were issues with the mounting, as you need to reposition the oil-injection filler cap. He said that connecting to the oil tube that runs down inside the frame was a bit tough and that it uses the stock fuel line, which he felt was too short. The stock tank holds 2.245 gallons. The IMS tank holds 3.0 gallons.

November 29, 2022by
You’d like to think that most people would have the wherewithal to clean up dog sh*t when out for a…

November 29, 2022by
The past few years have been outrightly abnormal when investing in crypto. We’ve seen the rise and fall of Bitcoin,…

November 29, 2022by
Nashville, TN – PageOptimizer Pro (or POP), the widely acclaimed and acknowledged content optimization tool for SEO, is delighted to…